Compelling new research determines that females between puberty and menopause are less likely to contract the virus. This suggests that estrogen may help in reducing COVID-19 incidence and in the development of symptoms, especially those related to increased survival.

Researchers at York University are on the frontlines of discovery, tackling issues of paramount importance and on a global scale. Case in point: Biologist Chun Peng, York Research Chair in Women’s Reproductive Health, undertook a comprehensive study that looked at the impact of sex and age in incidence, clinical features and outcomes of COVID-19 in Canada. Her PhD student, Jacob O’Brien, and summer student, Keven Du, assisted in the study.

The research trio discovered that females are less likely to contract COVID-19; and they have lower COVID-19 incidence, hospitalization, ICU admission, and fatality rates in Canada. Compared with postmenopausal females, females in childbearing years have a greater sex difference in incident rate and symptom manifestation. “The findings of our study suggest that estrogens may play a role in reducing COVID-19 incidence and in the development of symptoms, especially those related to increased survival,” Peng says.

This research was published in the Journal of Ovarian Research (2020). The two students were funded by the Canadian Institutes of Health Research (CIHR) and the Natural Sciences and Engineering Research Council of Canada (NSERC). 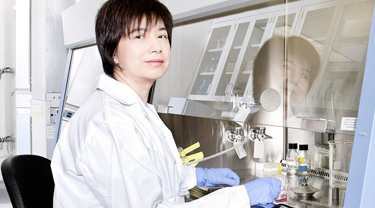 Peng’s areas of expertise are female reproduction and women’s reproductive health. The long-term goal for her research program at York is to understand the regulation of female reproduction and the mechanisms underlying the development of ovarian cancer and preeclampsia – a dangerous complication during pregnancy that involves high blood pressure and damage to organ systems, notably the kidneys and/or liver. Peng’s research will enhance the overall understanding of female reproductive health and therapeutic targets for ovarian cancer.

It would be an understatement to say the need to gain an understanding of COVID-19 is pressing. The virus is new, having swept the globe only last year, and the research world is still grappling with the fundamental questions about its nature, like: How, exactly, does it spread? How can we prevent the spread? Who is most vulnerable?

Peng’s team analyzed COVID-19 data from Statistics Canada up to July 2020, with the objective of finding out if estrogens played a role.

Initially, when they looked at the data, it showed that females were most likely to get COVID-19. However, the team dug deeper and discovered that when they took the high-risk groups – specifically, health-care workers, long-term care residences and some daycares – out of the mix and analyzed separately, they discovered that females between the ages of 20 and 70 had a lower incidence rate.

They found a significant decrease in the incidence rate among females of reproductive age, when compared to males in the same age group. That lower incident rate continued for women in the 60s and 70s compared to men in the same age bracket but to a lesser degree. However, females 80-plus were more likely to get COVID-19 than men.

Women in reproductive years less likely to catch the virus

Peng explains the significance of these findings: “Our findings tell us that if men and women were both equally exposed to COVID-19, women under 80 years of age would be less likely to be infected – especially for those in the reproductive years. This suggests that estrogens may play a role in reducing COVID-19 incidence for women during these years, between puberty and menopause, since they have much higher circulating estrogens than men.”

The research team also found that female patients have lower hospitalization and ICU (intensive care unit) rates. These sex-based differences, however, are observed in both the reproductive age and postmenopausal groups.

This research also determined that symptoms vary between the sexes, and females had lower fatality rates than males.

Future studies are warranted to confirm the protective effects of estrogens against COVID-19, Peng emphasizes.

To learn more about Peng, visit the Peng lab, here. To read the article, visit the Journal of Ovarian Research website.

To learn more about Research & Innovation at York, follow us at @YUResearch; watch our new animated video, which profiles current research strengths and areas of opportunity, such as Artificial Intelligence and Indigenous futurities; and see the snapshot infographic, a glimpse of the year’s successes.